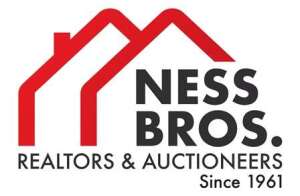 Mr. Ness was a 1948 graduate of Roanoke High School.  George served in the United States Navy during the Korean War.  He retired in 1984, after a career in real estate with Ness Bros. as a broker and auctioneer since 1965. He was also a seed broker and farmer auctioneer and performed one of his first auctions in this area in the 1950’s.  He was a past member of the Kiwanis and a member of SS Peter & Paul Catholic Church, life member of VFW #2689 and American Legion in Roanoke, IN, and Florida.

Along with his parents he was preceded in death by one daughter, Nancy Ness; and two brothers, Joe Ness and Palmer Ness.

In lieu of flowers memorials can be made to St. Vincent DePaul or VFW #2689 in care of McElhaney-Hart Funeral Home, 715 N. Jefferson Street, Huntington, IN, 46750.

Burial will be in Calvary Cemetery, St. Petersburg, FL.

To send flowers to the family or plant a tree in memory of George A. Ness, please visit our floral store.