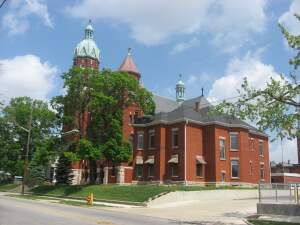 Fr. John Pfister retired as Pastor of St. Mary Catholic Church, Huntington, IN, for the Diocese of Fort Wayne-South Bend in June, 2015.

Father John was born in Huntington, IN, to Francis (Hank) and Florence V. (Schellhammer) Pfister on October 17, 1939.   His parents preceded him in death.

Father is survived by one brother, William (Linda) Pfister, Munster, IN; and one sister, Margaret Anne Copa, Clearwater, FL, and her late husband, Roderick Copa.

Fr. John was ordained as a Catholic priest on May 28, 1966, at the Cathedral of the Immaculate Conception, Fort Wayne, IN.  Father celebrated his first Mass after ordination at SS. Peter & Paul Catholic Church, Huntington, IN.

Father attended his elementary school years in Huntington at SS Peter & Paul Catholic School; from 1953-1959 he attended Our Lady of the Lake Seminary in Syracuse, IN, for high school and first and second year college.  He then attended The Catholic University of America, Washington D.C. where he got his B.A. and M. A. in Philosophy as a Basselin Scholar from 1959-1962.  He then completed his theological studies at Theological College at The Catholic University of America from 1962-1966.

A Vigil Service will follow the calling on Thursday, at 7:00 p.m.

Burial will be in Mt. Calvary Cemetery, Huntington, IN.

In lieu of flowers, memorials can be made to Diocese of Fort Wayne-South Bend for Seminarian Education or for Masses in care of McElhaney-Hart Funeral Home, 715 N. Jefferson Street, Huntington, IN  46750.

To send flowers to the family or plant a tree in memory of Father John F. Pfister, please visit our floral store.